Beef stock: can use cubes or condensed but best to use pork/beef bones, oxtail, chopped into chunks, simmered  down for 2-3 hours and skimmed of the majority of fat, you need about 3 pints stock.

A thumb sized chunk of ginger

Chop finely the garlic, the ginger, 2 of the chillies (remove seeds and rinse chillies under cold tap before chopping to reduce heat), slice the red onion, peel the outer skin of lemongrass stalks and finely chop the whiter ends. Add all of this to a tbsp of rapeseed oil in the sauce pan. Let it sizzle for 30secs then add stock. Add majority of torn holy basil leaves, leave a handful for garnish.

Bring to boil, then reduce heat and simmer for 10 minutes.

Slice the beef into thin strips, about two inches long and no thicker than a quarter of an inch, thinner if possible.

Ladle hot soup into these bowls, divide the noodles into both.

Provide a side dish with optional garnish of half lime, bean sprouts, some finely chopped red chilli and holy basil leaves

I am on a quest.  I can’t claim it has the profundity of a search for the Holy Grail or the philosopher’s stone, but to my tongue and stomach, it is a quest of far greater importance.

It is the quest for the best sushi in London… 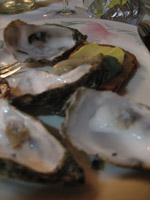 The Japanese food known to us as sushi is to some a strange and unappetising idea.

The idea of munching on raw fish makes their faces scrunch up in disgust, ‘raw fish!’ they exclaim, ‘how frightful!’ and then their monocle falls into their sherry.

But the ‘fishy’ taste that most people associate with our delicious, silvery, gilled aquatic friends, is actually caused by decay – fresh fish does not smell ‘fishy’.

‘Sushi’ actually refers to the sticky vinegared rice that accompanies the variety of seafood.’Sashimi’ is the sliced, fresh raw seafood.  And Sashimi is served very fresh, and expertly filleted.

There is also Bashimi, which is raw horsemeat, but I can’t say that my tongue and stomach want to accompany me on that particular quest.

So, where is the best place to get sushi in the grubby, noisy, glittering city of London?

This place offers delicious food at very reasonable prices.  It is authentic and unpretentious, but be sure to book ahead as it is also very popular.  And don’t let them put you in the basement, I hear it is awful.

This is quite possibly the best sushi restaurant of this list.  The food is exceptional. But don’t expect glamour.

This restaurant in Camden’s Parkway, near the Jazz Cafe, is a little wonder.  The food is a slight step away from the traditional, with a flourish that makes it even more tasty.  I am heartily addicted to it.  I highy recommend the soft shell crab starter, and the white tiger rolls.

When I first started coming here I was wary of the service as I had read reviews that gave a bad impression, but having been here many times now the staff are very friendly and helpful and familiar.

They do an exceptionally good value lunch menu, also.

So what if it has a slightly comedic name?  Victoria suffers from a dearth of decent eateries, and this little place is a haven of good Sushi. In a pokey little underground booth.

Soho’s Brewer street, just up from Picadilly has several sushi places, and this is probably the best.  It is good, solid Japanese fare at a reasonable price for central London.  But there is not much atmosphere.

I would not recommend eating here.  It is small and not very good value, and the sushi inauthentic and pedestrian.

The internet.  Do not listen to it.  It doesn’t know what it’s talking about – I think it might be drunk.

I thought I’d have a look and see what the internet thought the best sushi in London was and it referred me to a forum where some people were praising a place called Edokko, on Red Lion Street, Holborn.

Now, I tried to book a table at Asa Kusa first, but they didn’t have anything until 9.45, so I thought why not give this place a go and booked a table there.

It doesn’t look much outside, nor downstairs, but upstairs you take your shoes off and sit at very Japanese and authentic low tables.  The atmosphere is quite pleasant, and the service very attentive.

The sushi and sashimi, however, is preposterously expensive.  Tekka Don, for example, is rice with some tuna slices on it.  A fair price might be no more than ten pounds.

The food is not even *that* good.  I ordered the black miso cod – a rip off of the Nobu recipe that has become commonplace nowadays and it was inferior not only to that available at Bento Café in Camden, but also inferior to a version my girlfriend once cooked.  The cod was slightly underdone.

We had deep fried oysters (£10) which were good, the oyster remaining plump and moist in its crisp shell, and the sushi was not bad, but really not great, and worse than that of Asa Kusa.

I ordered some Toro, which was melty and tasty, as it should be for £3.50 a piece.  But the sea bass and sea bream was not as good as Asa Kusa’s.

This is an inferior and expensive place that caters to homesick Japanese people who assumedly haven’t got the hang of the exchange rate yet.

Oriental city was a magical place in Colindale, Brent (that’s right) where you could get a Kimono, a glow in the dark godzilla or a gelatinous pancake with things in it…in fact anything (oriental) that your heart so desired.

I had the best roast duck I have ever had at a restaurant there.

But sadly, as of 1 June,  it has gone.   Which is a shame as it was an authentic oriental food palace (warehouse) far removed from the seedy crime front of much of Leicester square’s Chinatown.

Oriental city, we salute you!