Avijit Roy, atheist and advocate of secularism, was hacked to death by a mob of murderers wielding meat cleavers, in Bangladesh, after threats from Islamist hardliners.

She talks of not being afraid to say what you think, and that is damn right. So this is what I think: Religion is like star signs – an erroneous folly that people cling to, to make them feel special.

It would be harmless enough if it had not been granted any power over the reality in which we all must exist. But unfortunately there are entire dynasties of wealth and power based entirely on the beliefs of people of the past more ignorant, or more deluded, or more cunning than we, perhaps. These dynasties are mighty and ruthless, they reign over and own notable chunks of the Earth

In these dynasties one of the worst crimes you can commit is to question the lies from which the great power is drawn. People are killed for doing so. But as long as you don’t question the lie, you can be assured that you are special – a member of the true believers, and will be granted a posthumous splendour to make up for the tyranny you must endure in life.

Unfortunately, feeling special is the underpinning concept of all fascistic movements, as well as all psychopathic notions of superiority. This superiority is defined by, and in turn decrees, the belief that others are inferior and therefore no more than meat or animals for exploitation and death(see the Koran for explicit description of the ‘kuffar’ or non-believers as lower than animals), so it is no surprise that inhumane acts like this murder, or the almost endless sickening parade of barbarism, subjugation and mutilation of women and general inhumanity perpetuate while stupid, self-serving ideas go unchallenged or revered.

You aren’t any star-sign. Those stars are illusions, many are long dead, as dead as many of the gods ancient peoples populated the same black and twinkling sky with.

You are not preferred by the creator of the universe, if there is one, simply because you submit to the will of an imagined tyrant and his earthly storm troopers. You are just a human being, equal in worth to all others. You are not superior and it does not matter how many thinking people you hack down with your weapons. You will never be so. Instead be equal with us all, we brothers and sisters in being and in thought, who wish to live in peace. Who don’t claim that we know all there is to know, but love the capacity to think and to question as a means to navigate those mysterious stars. Stars that don’t spell out your destiny, but that illuminate the darkness, as thought does ignorance.

‘Honour’ killings are not honorable. They are shameful murders sanctioned by misogynist, archaic and inhumane beliefs.

A Kurdish Turk has been accused of murduring his daughter in a so called ‘honour killing’.

Honour killing is a misnomer.

It is better named a shame killing. Or just murder.

There is no honour in killing your daughter because she was raped, or because she loves someone not acceptable to your plans.

There is nothing but shame. Ugly, stupid, shame.

There are many examples of horrific honour killings, one more below:

On October 27, Turkish press reported that 15-year-old Naile Erdas from the southeastern city of Van was killed by her family when she gave birth to a child conceived during a rape. The girl, who hid her pregnancy, reportedly begged doctors at a state hospital where she gave birth not to return her to her family, fearing that she would be killed in accordance with the local tradition demanding her family’s honor be cleansed. Doctors informed state authorities, but the prosecutor nevertheless handed the young woman over to her family, which, as Naile feared, killed her. At year’s end, Naile’s uncles and father were under arrest for making the decision to kill her, while her brother, the suspected killer, remained at large. Source: US Department of state 2006 report

It seems to me that shame and religion go hand in hand, much like the Muslim men who wander the streets of (for instance) Tanzania or Saudi Arabia, holding each other’s hands, but to whom it is forbidden to even shake hands with a woman.

In the Qu’uran, a women is plainly stated as being only half the value of a man.  In law as well as in mental aptitude.

In Judaism and hence Christianity, shame is brought upon poor innocent Adam through his spare rib partner, Eve, and her beguilement by a bad, wise, snake.

Woman are basically bad and they bring shame about for men.

In Islam women are asked (in stricter regimes some would say forced) to don the Hijab and to cover themselves and their ‘ornaments’.  In Wahhabist Islam (the form of Islam most prevalent, possibly due to the fact that it is the harsh form Saudi Arabia practices, promotes and exports using her vast material resources) Women must cover up, essentially because if they don’t, men can’t be held accountable for the shameful things they will do.

This topsy-turvy logic is evinced in the abhorrent way Sharia law is sometimes enacted:

In Somalia, 1000 spectators filled a stadium to watch a 13 year old girl be stoned to death for the crime of adultery, she was accused of this crime after reporting that she had been raped by three men.

Some people defend their mediaeval beliefs by saying that the old texts give them a moral structure to adhere to, but I think to anyone who cares about what is ethical, or humane,  these texts are predominantly unsacred products of their barbaric times – often used to excuse terrible acts and ideas.

Honour killing is just one such terrible act.

A shameful and unacceptable practice, dishonourable in the extreme.

Faith.  It is like when you know something, except without any proof. Also, if there is proof that shows that what you think is wrong (like Dinosaur bones) you still don’t change your mind.  That is why faith is better than science.  It doesn’t allow for being wrong, even when it is proved to be so. 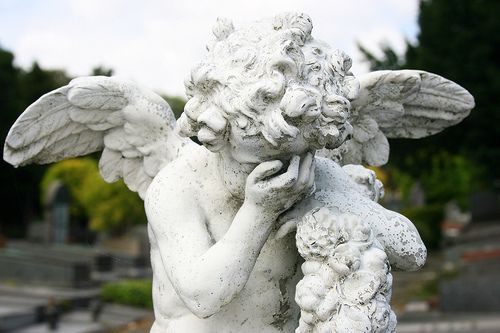 So, what are some of the craziest…I mean best…things that people of faith believe?

1. Creationists (mainly Christian) maintain that the Earth is less than 7,000 years old.

Science, using measurement and calculation puts the rough age of the Earth at about 4.54 billion years old (45,400,000,000).  This is based on the radiometric dating of rocks.  Zircon crystals in Australia have been dated at about 4.4 billion years old, they are the oldest known Earthly material.  Light spectrum analysis of the stars shows that they are also about the same age.

Balderdash! Cry the creationists.  The Bible is the literal word of God, so all you need to do to know how old the Earth is, is to add up all the dates.

Luckily, the Anglican Primate (not a concession to Darwin, some term for an Archbishop) James Ussher did so in the 17th Century, and found that the Earth was created at nightfall preceding Sunday October 23, 4004 BC.

In the course of his studies, he also found that Herod died in 4BC so Christ must have been born anytime between 37 BC and 4BC.

There now exists in America a Creation Museum. On their website the fact that they believe the Earth to be 6000 years old is elusive, but insinuated: ‘Biblical history is the key to understanding dinosaurs’.  It is what they, as evangelical creationists, believe.  Apparently there were Dinosaurs on Noah’s ark.

Other people who had previously come to similar approximate conclusions (the Earth being about 6000 years old) include the Astronomer Johannes Kepler, and Isaac Newton.

Incidentally, Newton had all sorts of far-fetched ideas, he was an avid Bible scholar and he even predicted (using the Bible as his source) that the world would end (Christ would return) in 2060 or thereabouts.  He had a passion for Alchemy, and in particular the ability to turn base lead into gold.  After his death, his body was found to be riddled with mercury, probably from his alchemical pursuits, which suggests that he may well have been suffering from mercury poisoning in his later years.

Here are some ‘Young Earth’ arguments and responses, from Tim Thompson